How Smart Is Your Dog? Find Out with ‘Dognition’ 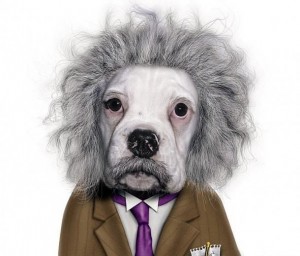 An interesting idea that we wanted to pass along to you all. Have some free time and some money burning a hole in your pocket? Put your dog to the test! If you do, share your experience with us at Market Street Animal Clinic.

A dog scooting butt-down across the carpet may not seem like the clever animal that comes closest to human babies in communication skills. But a Web app aims to build on the discovery by enabling thousands of dog owners to record the results of playful experiments with their canine companions.

The “Dognition” project could revolutionize scientific understanding of dogs by gathering data from man’s best friends all over the world. Such an effort would help answer broad questions such as whether different dog breeds really have different levels of intelligence — even as dog owners gain new appreciation of their beloved pets’ individual personalities.

“In a weekend, we could have 10,000, maybe 50,000 people give data,” said Brian Hare, associate professor in evolutionary anthropology at Duke University and director of Duke’s Canine Cognition Center. “I can’t even say how big of a quantum leap this will be.”

Dogs are “absolutely vapid” in many forms of intelligence compared to chimpanzees or bonobos, who have closer genetic relationships to humans, Hare explained. But dogs excel in understanding the human intent to communicate — the same skill that has proved crucial for human babies in developing language and culture. By learning more about dogs, humans can learn more about themselves.

Putting Fido to the test

As a tool for better understanding dogs, the Dognition Web app was launched today (Feb. 5) to coincide with a new book titled “The Genius of Dogs: How Dogs are Smarter Than You Think” (Dutton, 2013). Hare co-authored the book with his wife, Vanessa Woods.

“There are lots of dog books, but there has never been a way for someone to learn about their dog using the same tasks that scientists have developed to study a wide variety of dogs,” Hare told TechNewsDaily.

The $60 Dognition web app starts out by asking dog owners to answer questions about their pets’ behavior. (Some sample questions: “Does Benjy ever ‘intervene’ in an argument between other members of the household?” “When you laugh, does Benjy wag his tail?”

But the meat of the Dognition experience comes from games people can play with their dogs to assess five dimensions of intelligence: empathy, communication, cunning, memory and reasoning. Such games are similar to what Hare used to test dogs at his Duke University lab — dog owners just need plastic cups, treats, several sheets of paper, sticky notes, another human helper and their dogs.

The testing can show “what makes a dog a great companion” by revealing cognitive strengths and weaknesses. That might allow owners to better understand why their dogs behave the way they do.

“Maybe you find out your dog doesn’t have very good memory compared to other dogs,” Hare said. “Or maybe your dog is incredibly wily and is judging when you’re watching them or not. Some dogs know the difference between a person’s eyes being open or closed.”

Hare became inspired to create Dognition after seeing a parade of dog owners fly in from New York and California to volunteer their dogs for cognitive testing at Duke University in Durham, N.C. When the dog owners would ask about finding out more about the science, Hare used to refer them to scientific papers — a “completely naive response” on his part, Hare admits now.

Dognition’s data will allow scientists to search for the most intriguing behavioral or cognitive patterns and set up lab experiments to confirm the findings. It’s an ideal scenario for how “citizen science” and professional science can work together.

The Web app’s findings could end up sweeping away ideas taken for granted by many dog owners, such as the belief that intelligence can distinguish different dog breeds (“There’s some nice work showing that a lot of what people attribute to their dogs in terms of intelligence is based on their physical characteristics,” Hare said.) Or, if cognitive profiles do exist for certain breeds, scientists could investigate the profiles of mixed breeds.

The Web app’s data could also confirm fascinating ideas raised by small studies, such as the direction of a dog’s hair whorl corresponding to the location of certain mental functions on the left or right side of the brain.

As lifelong dog owner, Hare looks forward to trying out Dognition with his latest dog, a “shelter mutt” named Tasmania. He hopes that the Dognition project could eventually help future dog owners better understand the dogs they adopt down the road.

“When you get the dog from a shelter, wouldn’t it be nice to know what their cognitive profile is?” Hare said. “Not to judge them, but to have a successful relationship.”